AVAILABLE NOW . . . WHEREVER BOOKS ARE SOLD

"His witty eye for detail is on display throughout, as when he writes, "The terminal building at Iviliiq wasn't like a shipping container, it was a shipping container. As survival stories go, Lee's leans less into the awe-inspiring and more into the absurd, a fitting approach considering that one of his aims is to puncture the myth of the stoic and heroically conquering white male adventurer." -- Minneapolis Star-Tribune

“Both a gripping tale about an explorer’s bravado and a witty satirization of the expedition stories that fascinate armchair adventurers, Compass is a novel that follows an outsider to the edge of the world—and to the edge of his sanity.” -- Foreword Reviews

"A darkly comedic tale, superbly told, Compass is a tour-de-force debut from an author whose name we should all remember. " -- Will Ferguson,  Leacock Medal winner, Author of The Finder, Road Trip Rwanda, 419, and more.

We can’t all be heroes. Some try and succeed. Others posture and pretend. And a few—just a few—set off on their hero’s quest only to discover that failure was within them all along.

Compass recounts the adventures of a man who, after traveling the world shilling stories for a major geographic magazine about historic expeditions and explorers, sets out on an adventure of his own—an ill-advised and poorly planned trip to the Arctic floe edge under the disorienting twenty-four-hour summer sun. When the ice breaks and his guide disappears, the narrator ends up alone and adrift in the hostile northern sea. He draws on his knowledge of historic expeditions to craft his own, inept, attempt at survival. As time passes and he becomes increasingly disoriented, his obsession with Sedna, the Inuit goddess of the sea, becomes terrifyingly real.

Part Life of Pi, part Into the Wild, Compass draws heavily on true historical adventures, Inuit mythology, and its Arctic setting. The narrator, a self-aware buffoon who remains nameless throughout, is both remarkably well-informed and entirely useless. He knows just enough to steer himself into the path of disaster—repeatedly, often comically, and ultimately tragically.

Murray Lee is a doctor and teacher of medicine, splitting his time between North and South, practicing as a fly-in physician for isolated communities in the Canadian Arctic and working with actors, clinicians, and students at the University of Calgary medical school. For over fifteen years he has served as the regular visiting doctor to Naujaat, Nunavut, a traditional Inuit community on the Arctic Circle, whose people, culture, and geography greatly inform the setting and character of Compass. This is his debut novel. Learn more about the author on his Website. 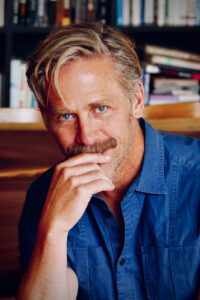 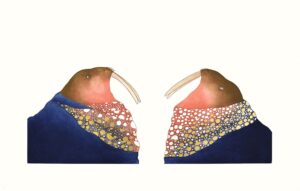 ORDER NOW FROM OPTIONS BELOW:

"I could not put down Murray Lee's Compass. It's not only that it is a highly literate, intelligent novel or that the story is riveting, but also the unstrained, steady humor, the easy erudition about the history of and conditions in the high Arctic and about survival there when lost that combine to make it such a compelling read. But most remarkable is the stunningly good writing, an effortless flow of language, word choices of startling precision and beauty. I thought of Salman Rushdie's prose, that gush of language that never misses, the fearless use of fantasy elaborating on and acting as a corrective to the hero's self-importance. Such a rare gift Lee has, a writer we'll be hearing of. Compass is a joy."

-- Sharon Butala, Author of This Strange Visible Air: Essays on Aging and the Writing Life (2021) and Season of Fury and Wonder: Short Stories (2020)

"Murray Lee's debut novel Compass is a meditation on hubris that takes the reader to the blinding white light of the Arctic and the limits of a southern adventurer's endurance."

“A powerful and visceral exploration of one man’s journey to the physical and psychological edge. Compass fuses the solitary struggle of The Martian, the magical realism of Life of Pi, and the twisted psychology of Heart of Darkness, layered on a stark northern landscape."

-- Arun Lakra, author of Sequence and winner of the Woodward Newman Drama Prize and the Praxis Screenplay Competition.