Dancing in the Kitchen 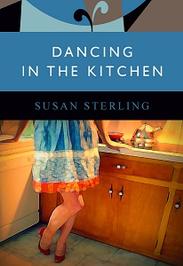 Preorder Now Wherever Books are Sold

This terrific debut novel explores the unraveling of secrets in a New England family after the unexpected death of the father.

The story is set in the fall of 1989 in a mill town in Maine, a New Hampshire village, and the Midlands of England. It is narrated alternately by the grown children: Annie, a minister's wife who has fallen into a troubled affair with her husband's best friend, and Rob, a labor historian who resists his sister's interpretations of their shared past, even as his own relationships become complicated by emotional legacies and a mysterious stranger.

Returning to her childhood home in Three Rivers, Maine, two months after her father’s death, Annie struggles to understand the past, certain that in its mysteries lie the answers to her present dilemma. An artist and the mother of a four-year-old daughter, she finds herself caught between a faltering marriage and an affair that has rekindled her long dormant passion for painting. The central dilemma for all the characters is whether they will follow their passions and actively seek out joy in their lives, or stay in honorable but at some level loveless relationships. Grief impels them into risky territory, and their choices are complicated.

Praise for Dancing in the Kitchen

"What a smart elegant writer Susan Sterling is. Dancing in the Kitchen, her finely observed first novel, is a moving exploration of betrayal, not just of others but ourselves."

"Susan Sterling writes with the intelligence and psychological complexity of Virginia Woolf, and her characters will quickly take up residence in your mind."

"A warm-hearted, perceptive story about how adults weather compromise and consider change."