No One Ran To The Altar 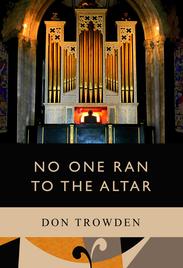 "One son walked out the door never to return as another son walked in."  So begins the second volume in the Normal Family Trilogy as we pick up this outlandish family saga in the 1970s, recounted through a series of interwoven chapters featuring the many colorful characters. (Find Volume One here.)

The story opens with a family tragedy as we see how far the Pendergasts have fallen from their days of fame and fortune. Through a series of flashbacks, we learn what became of Henry, Albert, Eve, Ned, Lucy, and the servants. We observe them facing an endless parade of obstacles, mostly overcome through humor and perseverance.

Much of the novel focuses on the Asperger’s brother, Albert. Albert is intellectually brilliant but emotionally stunted, which presents unique parenting challenges for his mother. With her death, Albert is cast off into the world on his own, until he reaches the point where his siblings must try and rescue him.

The once-idolized father Ned is a drunk living in squalor as he tears through a succession of women. As the narrative unfolds, Henry suspects he came back from the Second World War a rapist. Henry is tasked with caring for his blind father, which he does admirably despite the emotional toll of past betrayals.  Henry has succeeded in raising his own normal family, breaking the multi-generational cycle of paternal neglect and abuse. He struggles to play along with the fictional version Ned has created of his life, stewing in resentment as he faces many new disturbing revelations.

The writing intertwines humor with pain throughout. In the end, a tragic betrayal reshapes everything that came before in leaving the reader stunned and eager for the concluding volume in the trilogy, All The Lies We Live, published February 14, 2018. Info here.

Support Your Indie Bookstore
Available at your local bookstore. Use IndieBound to order, link here.

"Having thoroughly enjoyed the first book in the trilogy I was looking forward to the second. I’m pleased to say I wasn’t disappointed.

For me, Henry Pendergast and his dysfunctional family are so real, they seem like old friends. This time we catch up with them some years after the first book ended, as events and strands from past and present are woven together. This is a bold move which might have left the reader confused. However, the threads are blended so expertly that I was never jarred out of the absorbing narrative.

Henry’s story is both funny and poignant, so that one minute I was laughing, the next wiping away the tears. Don Trowden perfectly depicts how it feels to love our nearest and dearest but at the same time feel exasperated by them. There is also plenty of intrigue and mystery as Henry struggles to make sense of his life and unearth well-hidden—and shocking—family secrets.

This book is superbly written, and glows with warmth and intelligence. Don Trowden deserves to be widely read and known. I’m eagerly awaiting the third book in the trilogy."

Author of The Time Crystals

“In Trowden's winning second novel in the Normal Family trilogy, Henry is taking care of his elderly, obstinate father and growing closer to other family members following his brother’s suicide. Throughout, the author deftly weaves humor into tragedy. The descriptions are loaded with original phrasing—at times hilarious, at times cutting. The revelation of family secrets is fitting and poignant.”

The BookLife Prize in Fiction

"Caleb Mason likes sentences that finish well, that take readers on a journey that pays off on the final word. He devotes careful attention to musicality and edits his writing with the aim of creating a varied flow.

Using the pen name Don Trowden, Mason begins his latest novel with this gem of a sentence: “One son walked out the door never to return as another son walked in.” No One Ran to the Altar is the second in a family trilogy that tells the tragic and darkly comedic downfall of the once-proud Pendergasts."

"An amazing second entry to the 'Normal Family' trilogy by Don Trowden. Well-written, compelling, thorough, and surprising, this novel will carry you from the heights of a man who loves his family to the lows of what that love can do to a man when it is stressed and pulled by the peculiar, and sometimes tragic, behavior of those same family members.

Henry is the pivot point for this story of the fall of a family of privilege. The 'Normal Family' novel lays a foundation for the trilogy, and 'No One Ran to the Altar' picks up where the former left off, building up from his younger days into contemporary times. The story follows Henry as he deals with his anti-social, genius, but unemployable brother; his mother who has her own psychological issues that cannot be denied; his sister who 'gets it' yet seems to run from 'it,' and his father who he both loves and resents for many reasons, yet still recognizes the obligations of the "good son." Along with those family issues, Henry also has a wife and two children of his own to which he does his best to shelter from the shrapnel and fallout of his other family problems.

We follow Henry in high school, college, and beyond, all the while getting little revelations about what is really going on beyond the surface appearances of this family. We learn more and more about Henry's brother, Albert, and the writing is so good here, the picture of Albert is near-perfect, and the actions of his character are completely understandable. Again, Trowden paints just as aptly the character of Henry's father, Ned, and we relate to Henry's love, and how frustrating it is to maintain that love in the face of his father's past.

The last few chapters of the novel are like that climb to the top of a mount: exciting, wanting to see what's coming, then getting to the top and viewing a final revelation that had my mind staggering backward and immediately wondering when I will get to read the third entry into this trilogy. It is an excellent novel in the American literary tradition, and highly recommended."

Author of An American Gospel
Scroll To Top